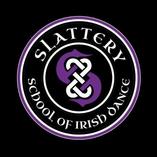 Welcome to the Slattery School of Irish Dance

General Rule:  A beginner is a competitor who has not taken Irish dancing lessons from a registered teacher prior to September 1st of the previous year.  A Beginner dancer must move into Advanced Beginner the following year.

​No solo costumes permitted; school costumes or black leotards and skirts only.

No solo costumes permitted; school costumes or black leotards and skirts only.

​NOVICE
General Rule:  A Novice dancer is one who has previously won a 1st, 2nd or 3rd place in Advanced Beginner.  A novice who wins a 1st place will advance to the Prizewinner category in that particular dance.
School costumes, solo costumes or black leotard and skirts permitted.

PRIZEWINNER
General Rule:  A prizewinner dancer is a dancer who has previously won a 1st in Novice in a particular dance.  A dancer must place 1st in one light shoe dance; Reel or Slip jig (girls only) and one hard shoe dance; Treble Jig or Hornpipe and consistently place 1st, 2nd or 3rd in other dances in Prizewinner to qualify for Preliminary Championship.

Slattery School Rule:  Once the dancer has achieved these requirements, the move to Preliminary Championship must be discussed with Elaine prior to changing dancer's level at a feis.

General Rule:  A dancer advances to Preliminary Championship after he/she has won 1st place in both a prizewinner light and hard shoe competition, and consistently placed 1st, 2nd, or 3rd in all other dances.  Preliminary dancers who win 3 first places in a calendar year, must move to Open Championship the following calendar year.  When a third 1st place win is achieved over several calendar years, the dancer must move to Open Championship the following weekend. (Mid-Atlantic Region Rule, all other regions require 2 first places).

School costumes and black leotards and skirts are permitted, but solo dresses are most common.

General Rule:   Congratulations!  You made it to the highest level of Irish Dancing!!  A dancer moves to Open Championship after winning three 1st places in Preliminary Championship.
Black leotards and skirts are permitted, but solo dresses are most common.​